Here are some nice things that customers have said about us

Folklore would have you believe that the wiring on Italian bikes can cause major headaches, but I can confirm, after riding the Americas on an Aprilia, that it's true.

Mechanically the bike was reasonably good, but by the time I got back to the UK the only answer to the myriad electrical gremlins I'd endured, was a complete rewire.

My desire was a bespoke loom that would suit my 'overlanding' needs perfectly; extra lights (completely independent), power take-offs, dual/spare rectifiers, that sort of thing, as well as ensuring no common earths, so that there could be no confusion in the future and any problem that may occur would only ever affect one component, therefore easy to trace.

I was delighted at the speed and efficiency of TWS Vehicle Wiring, which began with listening to all my desires, making notes and then confirming everything. What was most refreshing was that I never heard "That can't be done, mate", there were only suggestions of improvements I hadn't considered.

As a trial of the new wiring I set off to explore Iceland, fording rivers and immersing the bike variously in mud, snow and dust without a single problem. Next stop is Cape Town and I have complete faith now. I can't recommend TWS Vehicle Wiring highly enough. 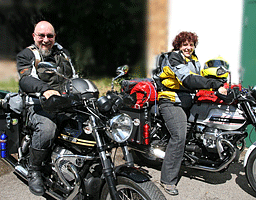 Newlyweds Tony and Sarah are two keen motorcyclists who thought it would be huge fun to go around the world on their bikes for their honeymoon. They chose Moto Guzzi V7 Classics for the task, and came to us to get some modifications done. These included making some extra power looms so that they could charge their phones and laptop, and run a sat-nav and communications system whilst listening to their favourite tunes.

We say: GOOD LUCK. See you when you get back! 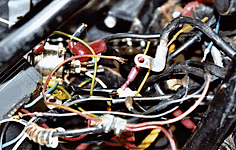 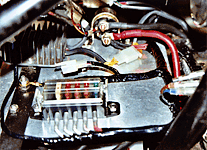 When I acquired this bike, it was basically running, but had obviously been assembled from a box of bits. The electrics were a shambles, and had been hacked around by someone who clearly had no idea. TWS Vehicle Wiring designed and built me a whole new wiring loom. The engine now runs beautifully, and the lights come on when I want them to. 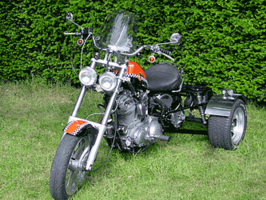 When TWS Vehicle Wiring takes on a wiring job, it’s the attention to detail you can rely on. If there’s a knotty problem, you can guarantee they’ll persevere (helped by copious mugs of tea) until they find the solution. TWS Vehicle Wiring completely rewired this trike eight years ago and has made various modifications to this and other vehicles over the years – we wouldn’t use anyone else.

I am just writing to say a great big Thank You to Tich of TWS Vehicle Wiring. There I was enjoying a biking holiday with my fiancée on two bikes in Cornwall, when the old Suzuki GSXR750 slab-sider streetfighter started to misfire. I checked the usual plugs, caps and leads but no, the misfire continued to get worse and worse, with it cutting in and out between two and four cylinders until it was un-rideable.

I thought it was possibly one of the pair of coils, so I rang Tich and he was most helpful over the phone. The following day the RAC recovered us to Swindon and within 20 minutes Tich had identified the problem: not the coils, but two solid but electrically unsound connections where a previous owner had modified the wiring loom. I couldn't believe it as the crimps on the connections looked sound and were not even slightly loose but, as Tich explained, they had corroded and were just not conducting electricity properly any more. Within minutes these were sorted, the bike was running better than ever and our holiday was back on track. 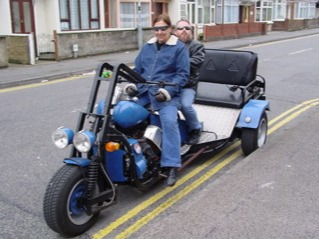 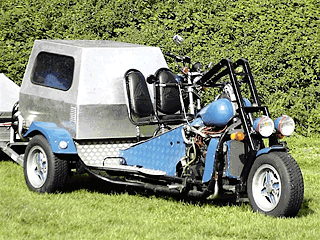 We bought the bare bones of this trike some six or seven years ago. The advert said 'needs some electrical work', but it turned out that the wiring loom was in a heap on top of the engine!

Tich to the rescue. This is a 1972, 1600cc automatic Ford crossflow engine. No mean feat, I can assure you, I was there when he first saw it, and what was said is not to be repeated here. He completely set the whole loom up from front to back from scratch and included all the connections for the trailer. The old loom was for recycling only.

Because of its size, all the work done on my trike has been done outside, rain or shine. Anyway, so long as you provide him with tea, strong and lots of it, you will get a job extremely well done and all the back-up support that is ever needed. My husband has cut around and modified the trike as the years have gone by, and Tich has followed up with the required mods to the wiring, just a phone call away. I would recommend him to anyone.

Finally, if you see him in the pub he's quite partial to a bottle of Newcastle Brown. 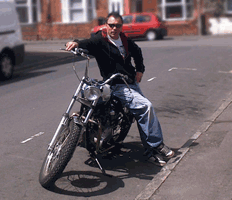 "It's a chopper Baby!" Dale does his best teapot impression on Andy's newly re-wired bike – Thanks Tich!

My car was undergoing extensive restoration, but the restorers were uncomfortable about re-doing the electrics. TWS Vehicle Wiring completely redesigned the wiring from the ground up. The new wiring harness incorporates extra fuses and relays so that the problems I encountered with the original harness, like burnt out switches and earthing faults, no longer happen. My car is now reliable, and I love driving it lots.